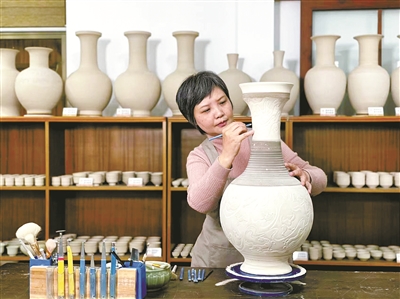 Shi Zhen, a craftsman, has been dedicated to reproducing mise celadon for many years. [Photo provided by Yu Mengdi]

Recently, a lecture on the Yue kiln celadon was held at the University of Nottingham Ningbo China.

Shi Zhen, a craftsman, introduced to the audiences the history and processes of Yue kiln celadon, its firing techniques and artistic innovations, and took them on a journey of appreciation both on ancient celadon treasures and the contemporary renewal works.

Yue kilns around Shanglin Lake were the forerunners and the best-known kilns in the history of Chinese porcelain craft.

Yue kiln celadon is famous for its olive-green color, made with a secret mixture of materials. Poets have likened the color to forest-covered rolling hills, emerald jade, and moonlight-illuminated lakes. The secret of the clay mixture remained unsolved until 1987, when artists figured out the ingredients based on celadon-ware discovered in the underground crypt of Famen Temple, Xi'an. The unique color is the work of nature's power and craftsmen's ingenuity, captivating people with its elegance and mystery for centuries.

Shi has spent 30 years making the traditional artworks, and she continues to draw from traditional techniques while focusing on creative innovation. "Yue kiln celadon is my life pursuit. What I am doing is connecting traditional Yue kiln celadon with this new era, increasing its artistic value and promoting it to more," she said.

The lecture was also livestreamed online to attract audiences from around the world. Vincent Lemarchand, President of the Rouen-Ningbo Friendship Committee, who watched the lecture online, invited Shi to promote celadon culture in France. "There is a ceramics museum in Rouen. We hope she can bring celadon works and hold an exhibition here," said Lemarchand.

Yue kiln celadon is the most prized type of porcelain in ancient China. In the Eastern Han Dynasty (AD 25-220), the earliest Chinese porcelain was successfully fired in the dragon kiln of the land of Yue. Therefore, Yue kiln celadon is considered "the ancestor of all porcelain". In the late Northern Song (AD 960-1127) and early Southern Song Dynasties (AD 1127-1279), Yue kilns went into decline after more than 1,000 years of porcelain-making. Today, the Yue kilns are recognized as the most influential and long-lived kiln cluster in Chinese history.

Yue kilns were scattered across Cixi, Yuyao, Shangyu, and Shaoxing in Zhejiang province. "Yue" is short for "Yuezhou", because these places were under the jurisdiction of the Yue Prefecture (Yuezhou) in the Tang Dynasty (AD 618-907). Historically, there were three Yue kiln clusters in eastern Zhejiang: the midstream area of the Cao'e River in Shangyu, the Shanglin Lake area in Cixi, and the Dongqian Lake area in Ningbo's Yinzhou District. Among the three, Shanglin Lake was the most active, with 179 historical kilns dating from the 1^st to 13^th century. They embody the entire history of the Yue kilns from their birth, rise, to eventual decline. Referred to as an "outdoor celadon museum", the Shanglin Lake kiln cluster is unique nationally and globally not only for the large number of historical kilns discovered, but also for the long historical period it spanned.

Cixi was a hub of Yue celadon production and also a departure port of the ancient Maritime Ceramic Road. Shanglin Lake and nearby ancient Yinding Lake, Du Lake, Baiyang Lake all had massive celadon-firing kilns in their vicinity. The area was the porcelain capital from the 7^th to the 13^th century. Notably, "secret-color celadon", a classic, highly-valued variety of porcelain made for royal use, was produced in the Shanglin Lake area.

In the ancient times, Yue kiln celadon was exported not only across the Asia-Pacific region (including the Korean Peninsula, the Japanese islands, and Southeast Asia), but also to Europe, the Americas, and Africa. As a departure port of the ancient Maritime Silk Road, Mingzhou Port helped forge friendships between different cultures and peoples through active trade. Via commerce, Yue kiln celadon became known and highly-valued around the world.

Let us turn the clock back to modern times. There're also modern-day innovations in Yue kiln celadon craft, such as "The Shanglin Fantasy collection". It was inspired by Shanglin Lake's natural environment and local culture to embody profound symbolism and encourage imaginative interpretation, in line with the traditions of Chinese art. Contradictions such as far and near, heavy and light, real and imagined, historical and modern, are integrated to convey a poetic, sublime beauty, and to serve as a gateway to understanding life and the cosmos.

In recent years, Ningbo have relied on the rich historical and cultural resources of the Yue Kiln site around Shanglin Lake to restore Yue celadon firing techniques and reconstruct the celadon industry, with increasing influence.

Local authorities are launching more events to promote traditional Chinese culture. A series of online and on-site lectures will be held to encourage people from around the world to learn about Ningbo through its intangible cultural heritage items.