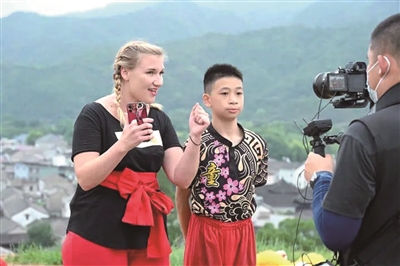 In the video, 13-year-old Zhang Zhenhao showcased a rehearsal without wearing a lion head costume and a stage performance in full costume. The video received many ‘thumbs-up’ and was forwarded by netizens worldwide. Zhang has been learning the lion dance for nearly 3 years and won first prize at the Zhejiang Dragon and Lion Dance Championships for two consecutive years.

The Qiantong lion dance in Ningbo has a long-standing tradition dating back to the 18th-century Qianlong reign during the Qing Dynasty (1644-1911). However, this folk dance was a dying art form since the mid-20th century. It was not until the Lantern Festival in February 2016 when the dance popped into the view of local villagers again. The revival of the lion dance culture in Qiantong Ancient Town can be credited to a native youth, Tong Panfeng.

By coincidence, Tong was inspired to revitalize the lion dance culture upon learning that his grandfather had been a member of the former Qiantong lion dance team. He learned the art of lion dance by traveling across Shandong and Anhui provinces, the Guangxi Zhuang Autonomous Region, and other places in 2015. After returning to Qiantong, Tong decided to promote the dance.

With the support of the local authorities and Qiantong Town Central Elementary School, Tong established the “Dragon and Lion Dance Team of Qiantong Central Primary School” as an extracurricular course and formally recruited young students in 2017. Every Thursday afternoon and weekend, young boys and girls could be seen practicing the lion dance on the school’s playground, in the yard of the town’s ancestral hall, and on the hills outside the town. Running, martial-art squats, push-ups, and footwork routines are all part of the lion dance, which requires not only practical movement skills but also strong physical fitness and volitional characters.

The children who insisted on training over the past few years were all hard working, undergoing tears and injuries. It is not uncommon to see young members who failed to try out for the tournament after a two-year preparation continue with their practicing. Tong Panfeng said, “The spirit of the dragon and lion characterized by self-reliance, courage, propriety, and loyalty also has a bearing on shaping children’s characters. This is the charm of the fine traditional Chinese culture.”

Recent years have witnessed admirable achievements of the lion dance team in provincial and national dragon and lion dance championships. “You’ll never get tired of doing what you love,” added Zhang. For him and his young team members, the lion dance is not just a novel sport but a cultural tradition embedded in their DNA.