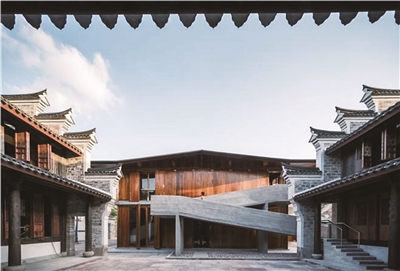 As a land of culture and talents, Ningbo is home to many famous private libraries throughout history, in addition to the world-renowned Tianyi Pavilion. Baozhu Building, a 183-year-old private library located in the Cicheng Ancient Town of Ningbo’s Jiangbei District, was officially reopened in late July. Books donated from all around the country are to enrich the library resources thanks to the efforts of Feng Jicai, a well-known contemporary writer in China. This time-honored library has taken on a new look.

Baozhu Building sits at No. 6 Shiping Road, Cicheng Ancient Town, in the former mansion of the Fengs. Lying to the north of Baozhu Mountain, it is also known as Mansion of Baozhu Mountain. It is one of the best-preserved private libraries in China, with a history of nearly 200 years, built by Feng Benhuai during the reign of Emperor Daoguang (1821-1850) of the Qing Dynasty. Feng's family is well-known across Cicheng town and even Cixi city. Feng Benhuai is a descendant of the well-renowned family in Eastern Zhejiang. Historical evidence suggests that the library was home to more than 10,000 books at its peak, comparable to the Tianyi Pavilion and Wugui Building.

After 17 years of research and renovation, the old library was reborn. Before the renovation, the library consisted of three rooms and two lanes: the first floor was for the residence, the second floor was said to be used for keeping books, and there were stairs on the east and west sides. Walking into the building today, you will find that the mottled wooden door is undamaged and termite-free — the quality of the carpentry is excellent.

The renovated Baozhu Building covers an area of about 5,090 square meters, with a floor area of nearly 3,279 square meters. The architecture is laid out in a traditional courtyard style, with three halls and two floors. There are four main buildings, including 2 original wooden buildings: Baozhu Building and Feng’s former residence at No. 4 Shiping Road. The 2 new buildings include the pavilion with a spiral sunk panel and a climate-controlled book depository. One wooden entrance and one wooden pavilion are also included.

In 1949, the Feng’s family donated all the books to the Xiling Seal Art Society, a Chinese arts organization in Hangzhou. According to Feng Hancai, a descendant of the family, all the books at that time were packed in bamboo baskets and carried by people to the west of Cicheng under the Dexing Bridge, where they were loaded onto ships and transported to Hangzhou. Staff from the Feng’s family and Xiling Seal Art Society jointly escorted the cargo for the entire journey to ensure the safety of these precious books. Unfortunately, the volumes were not listed separately at the Society and as a result the specific number and types of books previously stored in Baozhu Building remain unknown.

At an international academic conference organized by Zhejiang Library in 2007, Baozhu Building was presented as one of fourteen well-preserved old libraries in Zhejiang Province, along with Tianyi Pavilion in Ningbo and Jiayetang Library in Huzhou. Experts believe that – in addition to Tianyi Pavilion and Wugui Building – Baozhu Building should be the third well-preserved library in Ningbo, embodying the city’s time-honored culture.